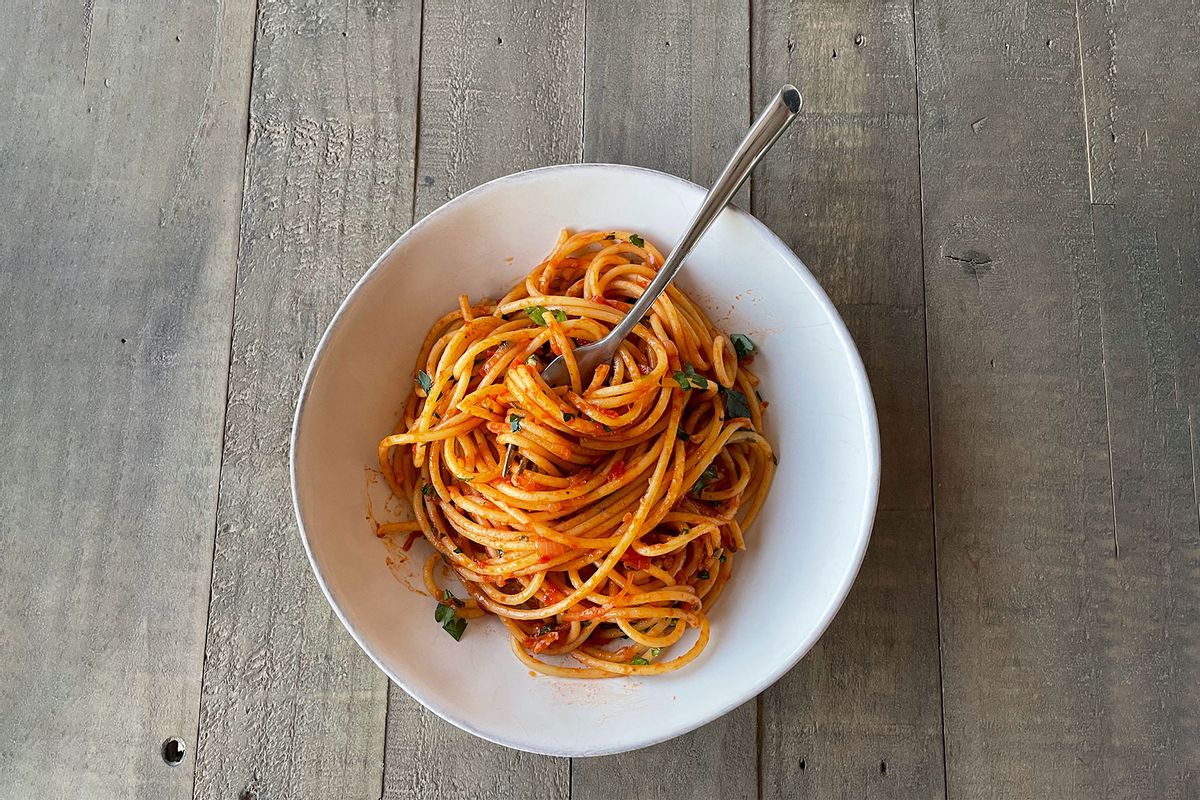 A love letter to bucatini, the perfect pasta shape

Is there a single food for you that can reliably improve your mental state? Does it fully encompass the textural, sensual and soothing joy of eating? Does that give you a little more faith in human fantasy and abilities?

For me, that food is bucatini pasta. You know, the long, thick spaghetti with a hole in the middle. So named from the Italian word “bucato,” which means pierced, bucatini were literally designed to cook evenly (inside and out simultaneously) and capture the sauce – a thought I find endlessly comforting.

Indeed, no shape envelops more elegantly the egg carbonara, the tomato amatriciana and rich guanciale or the anchovies melted in olive oil with garlic and cheese. Yet this shimmering, swirling heap is not an art exhibit; bucatini come alive with your first bite. They bounce, they squeak, they hiss, they toss the sauce in unpredictable directions.

Over the centuries, Italian dried pasta artisans have made bucatini (reports point to it from around 16th-century Sicily, National Pasta Association chef and spokesperson Rosario DeNero tells me), they took great care to ensure that we eaters had such a whimsical and sensual experience. .

This shimmering, swirling heap is not an art exhibit; bucatini come alive with your first bite. They bounce, they squeak, they hiss, they toss the sauce in unpredictable directions.

Like all dry pasta, bucatini only require two ingredients: water and coarse durum wheat semolina. Once the dough is kneaded to the right consistency, it is pushed or extruded through a die or metal disc with holes in it to cut into the desired shape. In this case, each hole contains a small metal piece in the center to create the tubular shape of the pasta. Traditional dies were made entirely of bronze, which creates a rough surface ideal for capturing sauce. Many industrial pans these days are made from Teflon, which gives pasta a smoother, more uniform texture.

Of course, electric extruders (or even pulled by donkeys or people) didn’t exist in the 1500s when bucatinis appeared, as DeNero points out.

“At the time, it was said that the Sicilians used a wooden or iron rod, very thin like the ones found on umbrellas,” says DeNero. “They would take a small ball of pasta the size of a chestnut, roll it over the iron to create a tube, then take the pasta out of the iron and you have this handmade bucatino. The Sicilians still call it pasta e ferretti (i.e. pasta with iron).”

RELATED: This Chickpea and Saffron Almond Pasta Will Transport You to Spain

While the kingdoms of Sicily and Naples were often united politically, the form eventually found its way to central and southern Italy, becoming popular in the Lazio region, particularly Rome, where it remains today. now a favourite. This explains why we so often see bucatini paired with romaine sauces like the aforementioned cacio e pepe, amatriciana, and gricia (amatriciana without the tomatoes).

To ensure even cooking, bucatini require long drying—often more than a day—at moderate temperatures. “Originally, people used to hang them up to dry in the sun with the sea breeze, so it wouldn’t be too fast,” DeNero explains.

If you were walking through Gragnano, a small hill town southeast of Naples, a century ago you would indeed have seen sheets of pasta hanging to dry above the streets like clothes on a line.

RELATED: My Pasta, Me: Forging a Home in New Mexico with Hatch Green Chili Pasta

“They had built the whole village so that the main road, called Via Roma, would catch that particular breeze from the mountains to the sea,” says Beatrice Ughi, founder and president of Italian specialty food importer Gustiamo, in the Bronx. “Each family took advantage of this breeze and hung their pasta out to dry for days.”

Gragnano, also known as Città della Pasta (City of Pasta), has allegedly been making seccata (dry pasta) since the 1200s, due to its proximity to wheat fields and the clear spring water that descends from the mountains that enclose it on three sides – not to mention those favorable sea breezes.

It’s in this village, in a small, 115-year-old family-owned factory called Faella, where bucatini are still extruded through bronze dies and slowly dried for nearly two days to produce rough, flavorful bucatini that smells of toast. fresh grains and bread when baking. Faella’s laborious and expensive process (bronze dies must be replaced every two to three years) produces greatly reduced supplies.

It’s in this village, in a small, 115-year-old family-owned factory called Faella, where bucatini are still extruded through bronze dies and slowly dried for nearly two days to produce rough, flavorful bucatini that smells of toast. fresh grains and bread when baking.

“What is small? Ughi asks, before replying to himself: “It’s as if a change in pasta production at (pasta industrial giant) Barilla is equivalent to what Faella produces in a year; it’s remarkable.”

I later confess to Ughi that at least an hour before our phone call, I had started talking about Faella’s “big bag” of $38 bucatini in Gustiamo’s online store. “Five and a half pounds should last me six weeks!” I reason.

This hoarding mentality dates back two years, to some temporary shortage of bucatini that occurred at the start of the pandemic – when consumers were clearing pasta stores almost as fast as toilet paper.

DeNero credits the bucatini shortage with a “perfect storm” of factors, including demand far exceeding the already limited supply of this pasta specialty (more difficult to make due to its signature hole) and the odd and untimely banning Italian manufacturer De Cecco from the US border, which writer Rachel Handler covered in spectacular detail for New York Magazine’s Grub Street. This latest result of a US Food and Drug Administration (FDA) investigation into a slight iron deficiency in De Cecco’s bucatini – which must meet a certain minimum to be sold in the US. In a follow-up post in February, Handler said De Cecco had resolved the issue internally and was waiting for the FDA to remove its automatic block.

It had been months since I finally got my hands on a box of Bucatini Rustichella d’Abruzzo. I worked methodically on the carbonara recipe that had taken me a decade to perfect, feeling almost giddy joy as I caught a ladleful of cooking liquid from the starchy pasta, which kickstarted the frenetic process of transforming eggs, cheese and pork fat in sauce. Indeed, part of the reason bucatini hold the sauce so well has to do with how it’s cooked, which is the final piece of that perfect pasta puzzle.

“To get what we call ‘mantecatura,’ when you’re making creamy pasta with starches finishing cooking in the sauce, long cuts respond better to this phenomenon,” DeNero explains. “That’s what makes pasta so great – this whole sensual experience of eating something that’s not just one texture, but multi-textured.”

I can’t help but marvel at this delicate blend of artistry and precision engineering, perfected by thousands of epiphanies achieved over hundreds of years – in fields, towns and factories, in domestic and professional kitchens. All in the name of one pasta shape. Just pause on this bright, creamy work of art before dutifully attacking it with lively, joyful abandon.

More pasta stories from this author: