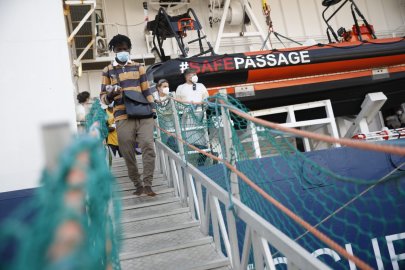 The Geo Barents rescue ship, run by the Médecins Sans Frontières (MSF) medical charity, docked at a Sicilian port on Wednesday and disembarked the 60 migrants it had rescued just over a week earlier.

The 60 migrants rescued by MSF disembarked from the Geo Barents in the Sicilian port of Augusta on Wednesday morning (September 29) after undergoing compulsory COVID-19 tests by Italian health authorities, the medical association wrote on Twitter.

This morning, 60 people rescued disembarked from #GeoBarents in the port of Augusta after undergoing a compulsory COVID-19 test by the Italian health authorities. After arduous journeys, abuses and detentions in Libya, we are happy that they are now in a safe place. © Pablo Garrigos, 2021 pic.twitter.com/I2YQ6u7YcL

The press agency Associated press (AP) later reported that everyone on board had tested negative for the coronavirus. The 60 migrants included a seven-week-old baby as well as six women and 21 unaccompanied minors who were taken to begin their quarantine at onshore centers near the port. The rest of the group were taken aboard another ship, a quarantine ferry, to begin their mandatory quarantine period.

The migrants were rescued from two separate boats in the Mediterranean on September 20.

“Great distress for those on board”

The day before the disembarkation, MSF had tweeted that the mental health of those aboard the Geo Barents was deteriorating, after waiting eight days (at the time) to be assigned a port to disembark. The association cited one of their psychologists, Hager Saadallah, who said that feelings of hope to be saved had “been replaced by fear, hopelessness, anxiety and insomnia.”

Saadallah added that “the uncertainty regarding the disembarkation process causes severe distress for those on board.” MSF nurse Mary-Jo Frawley aboard the Geo Barents compared the feeling migrants had at sea to “being stuck in a crowded subway in the dark. No one is helping. You become desperate, claustrophobic. exactly what people feel on boats at sea. They dream of safety but find themselves in this horrible situation. “

According to AP, the migrants had left from the Libyan coastal town of Zawiya. MSF tweeted at the time of their rescue that “most of the survivors suffered from slight exposure to the fuel and some of them sustained minor injuries on the distressed boat”.

The nurse, Mary-Jo Frawley, also tweeted a photo of several young migrants on board from Somalia, Côte d’Ivoire and Togo looking at a map of Africa and seeing the distance they had traveled to reach where they are now. She commented that the young migrants were “shocked” when they saw the distance but had a “will to survive”.

“These young people from Somalia, Ivory Coast, Togo, how did they get from there to here? On board when they open the card, they are shocked to see how far they have managed to go. to survive”.

When the migrants learned they were going to disembark in Augusta, Sicily, many “cheered and danced while others broke down in tears upon seeing the shore,” reported PA.

This is Geo Barents’ third mission in 2021. Since June, PA reported that he had already brought 792 migrants to Sicily. After completing their own mandatory quarantine period, the crew hope to leave on a new mission in ten days, according to MSF.

So far this year, according to data from the United Nations refugee agency UNHCR, as of September 26, 44,212 people had arrived in Italy by sea. This is almost double the number of people who have arrived in Italy. from the same period in 2020.

MSF, which is present on the island, said that in just two months they had helped local authorities with 11,000 people. The doctor leading the MSF team in Lampedusa, Dr Stella Egidi, said that not only were there no adequate structures in place to care for those who had suffered traumatic experiences, but also that the overcrowded and unsanitary conditions inside the island’s hotspot were causing the and the mental health of those staying in the centers to deteriorate.

A young man from sub-Saharan Africa wrote to an MSF psychologist that “if we hadn’t talked on the phone yesterday, I would have died of anxiety.”

Lampedusa’s problems, according to MSF, have “been present for decades”. They believe that aid on the island is offered in an “emergency framework” rather than putting in place more permanent structures to deal with the reality of the situation.