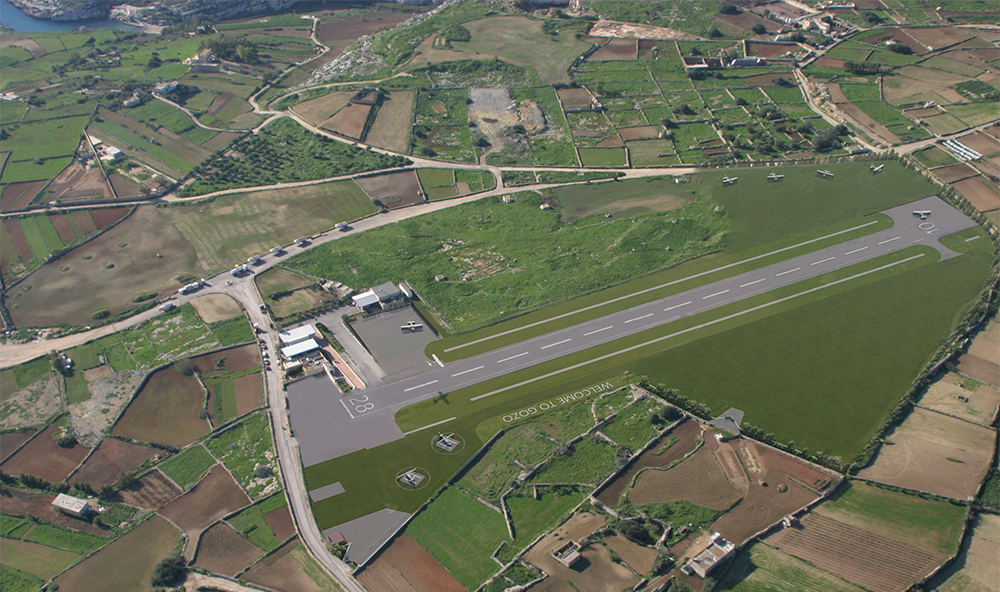 The Gozo Regional Development Authority has concluded that the benefits of a Gozo rural airfield project ‘far outweigh’ its drawbacks as a public consultation process helped conclude this week’s assessment of the regional impact of the project.

This enthusiastic recommendation was made despite seemingly disappointing estimates of the economic benefits of the project, which is expected to directly and indirectly create 48 relatively modest full-time jobs, including 20 people directly employed at the airfield itself.

And those 20 people may well be employed within the public sector, as the consultation process led the GRDA to conclude that it would be best if the government “maintained an active role in the management of the aerodrome to ensure that the main objectives of this intervention are achieved, although these may be less cost-effective than other activities.

The proposed project would extend the existing heliport at Xewkija to convert it into a 445m runway, a short length that would serve only small fixed-wing aircraft with short take-off and landing (STOL) capabilities. The runway is expected to accommodate aircraft with a maximum capacity of just 9 passengers, although a special waiver issued by the Civil Aviation Authority could potentially allow the use of 19-seat aircraft such as the de Havilland Canada DHC -6 Twin Otters. But larger aircraft would entail greater operational costs, not least because they would require greater support from civil protection: a requirement that makes their rapid introduction difficult.

A cost-benefit analysis concluded last February estimated that the project would require an initial investment of €2.5 million, of which €1.6 million would be needed to upgrade the existing heliport and the remaining €900,000 spent to the acquisition of a fleet of aircraft. In an estimate released just before Russia’s invasion of Ukraine sent fuel costs skyrocketing, the project was expected to incur operational costs of 1.2 million euros per year “excluding transfer payments between different agents of the economy”.

The analysis concluded that the project had a benefit-cost ratio of 2.06, although this included estimated savings of €1.2 million attributed to “travel time saved between Gozo and its mainland”.

It is estimated that the aeronautical activity itself generates an annual average of €895,777 in added value; to which the analysis applies various multiplier effects to conclude that the total benefits would bring an added value of €2.5 million, 48 full-time equivalent jobs and tax revenue of €844,460: approximately two-thirds of the operational cost.

The planned jobs would include 13 professional positions, and despite the announced benefits of the project for the tourism sector, it should only lead to the creation of 5 jobs in the hotel and catering industry. And any multiplier effect – and the jobs it would bring – would not necessarily be confined to Gozo itself: the actual jobs created on the island would in fact be less.

It is estimated that the aerodrome “could potentially operate around 69,783 passenger journeys per year”, a figure which represents around 4.5% of the number of passengers between Malta and Gozo recorded in 2019, a pre-Covid peak which did not not yet exceeded. It would also represent almost 11 round trips per day, at full capacity.

If these figures are achieved at an average ticket price of €30, the service is deemed financially viable.

It is worth highlighting that the feasibility studies carried out for the launch of the latest Gozo-Malta link – the fast ferry service launched last year – had concluded that “the number of people willing to use the ferry as a clean mode of transport and alternative to the auspicious particular vehicle for the market to make offers.

But as it happens, the two operators running the service are now insisting it is not financially viable and are insisting that the government increase subsidies for the service: a demand the Gozo minister has suggested Clint Camilleri, the government could be open.

Although comments provided through the public consultation process have not been made available in full, the various suggestions made have been summarized in the Regional Impact Assessment document.

As you might expect, not everyone is in favor of the project: with various individuals and environmental groups rejecting plans for an air link between two destinations 35km apart – Malta International Airport and current heliport – as “merely a prestige connection without any justification.” The small capacity of the aircraft envisioned for the project has not failed critics, who have suggested that the project would simply cater to a few narrow privileged interests.

But the GRDA report nevertheless pointed out that the majority of feedback came from individuals and groups in favor of the project, although not all were entirely convinced of its scale.

Various submissions from Malta’s aviation industry pushed for a longer runway, not least because of concerns that relatively inexperienced pilots might not feel comfortable using a runway that would leave little margin of error. Others have also argued that a longer track would make Gozo more accessible from Sicily and southern Italy. Nevertheless, the 445m runway was judged by the GRDA to have the best balance between the potential economic benefits of the project and the negative environmental impact.

The GRDA also rejected suggestions to extend the proposed opening hours beyond the suggested 6 a.m. to 1 a.m. period, acknowledging that noise pollution was one of the main impacts of the project.

Nonetheless, he argued that the airfield’s impact on noise pollution was relatively small compared to other activities, with firework crackers being held up as the supreme example. The aircraft that would be used, he said, would generate a maximum of 90 dB, significantly less than the 130 dB generated by jet engines or even the 100 dB generated by helicopters.

The aviation industry has also highlighted logistical problems, including fuel supply on an island with limited storage capacities. The project does not provide for a fixed fuel depot to limit its environmental impact, but feedback has led the GRDA to consider the possibility of an underground depot, a proposal for which no cost estimate has been provided.

A suggestion to develop hangars was rejected, however, with the GRDA suggesting that aircraft tethers could provide small aircraft with some protection from high winds in a much less invasive way. Although the advantage of the hangars was recognised, it was concluded that the “rural design” adopted for the proposed airfield should be retained.