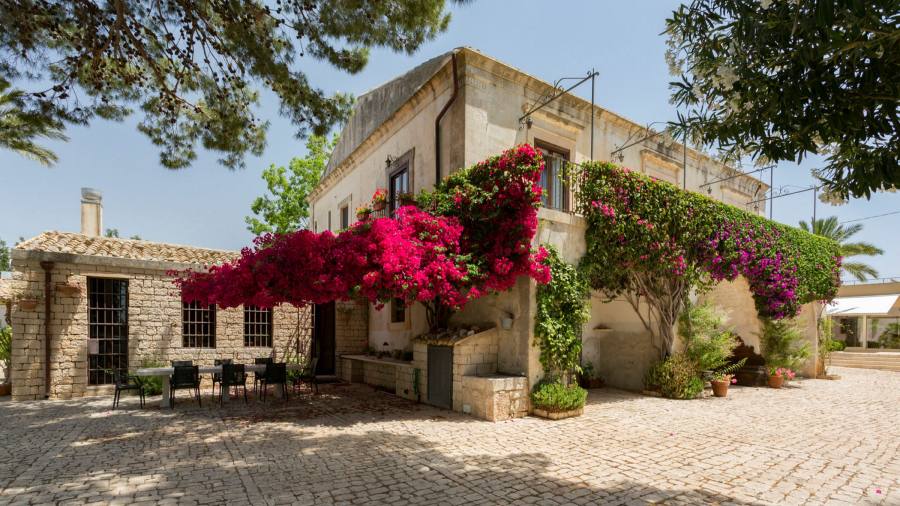 Where On the outskirts of Scicli, a small baroque town. Modica, a UNESCO World Heritage Site, is half an hour’s drive away. Catania airport is 90 minutes away by car.

What A 10 bedroom, five bathroom property consisting of an original manor house, a large guest house and three further annexes. The 10,700 square foot villa is set in over an acre of manicured gardens and features a swimming pool with a shaded area as well as a wellness room with sauna and hydro massage shower.

Why The sand dunes and azure blue sea of ​​Sampieri beach are a 10 minute drive away.

Where In Scauri, the second largest village on the volcanic island of Pantelleria. It is accessible by ferry from Trapani and by domestic flights; its airport is a 20-minute drive from the property.

What A five bedroom Damusso, recently built in the typical architectural style of the region. The Damusso is designed to adapt to the landscape and the windy and dry climate of Pantelleria. The walls are made of lava rock up to one meter thick to insulate against all temperatures. The 200m² house consists of three buildings sitting in one hectare of gardens. The property has a covered outdoor kitchen, outdoor lava rock shower and swimming pool.

Why Pantelleria Island National Park is a 20-minute drive away and includes Lake Venere, which is fed by volcanic hot springs.

Where On Via Valverde in the Sicilian capital of Palermo. It is a 10-minute walk from La Cala, the town’s old port. Palermo airport is 40 minutes away by car.

What An air-conditioned two-bedroom, three-bathroom apartment in a former monastery. Arranged over three levels in an open-plan design, the renovated property features character features such as a majolica mural, exposed brick walls, handcrafted balustrades and wooden roof trusses. Most of the furniture, some of which was custom made, is included in the sale.

Why The property overlooks the rooftops of Palermo’s old town, admiring the dome of the Baroque-style San Domenico church.

Where On the southwest coast, half an hour’s drive from Agrigento. Agrigento is one of the oldest cities in Sicily, renowned for its well-preserved Greek temples. Palermo airport is 90 minutes away by car.

What A modern villa with 180 degree views of the sea and nearby countryside. The five-bedroom, five-bathroom property includes a fitness room, outdoor dining area, and sea-facing pool.

Why A nature reserve – Riserva Naturale Orientata Foce del Fiume Platani – is nearby.

Where In the historic town of Piazza Armerina, 1h15 drive from Catania airport.

What Period property with 10 bedrooms and 10 bathrooms, on 11 hectares in a green setting. The main villa has antique Santo Stefano di Camastra ceramic floors and intricately decorated ceilings, and there is an ornamental garden.

Why Nearby is the Villa Romana del Casale, a Unesco World Heritage Site with one of the largest collections of Roman mosaics in the world, which were preserved by a 12th-century landslide.