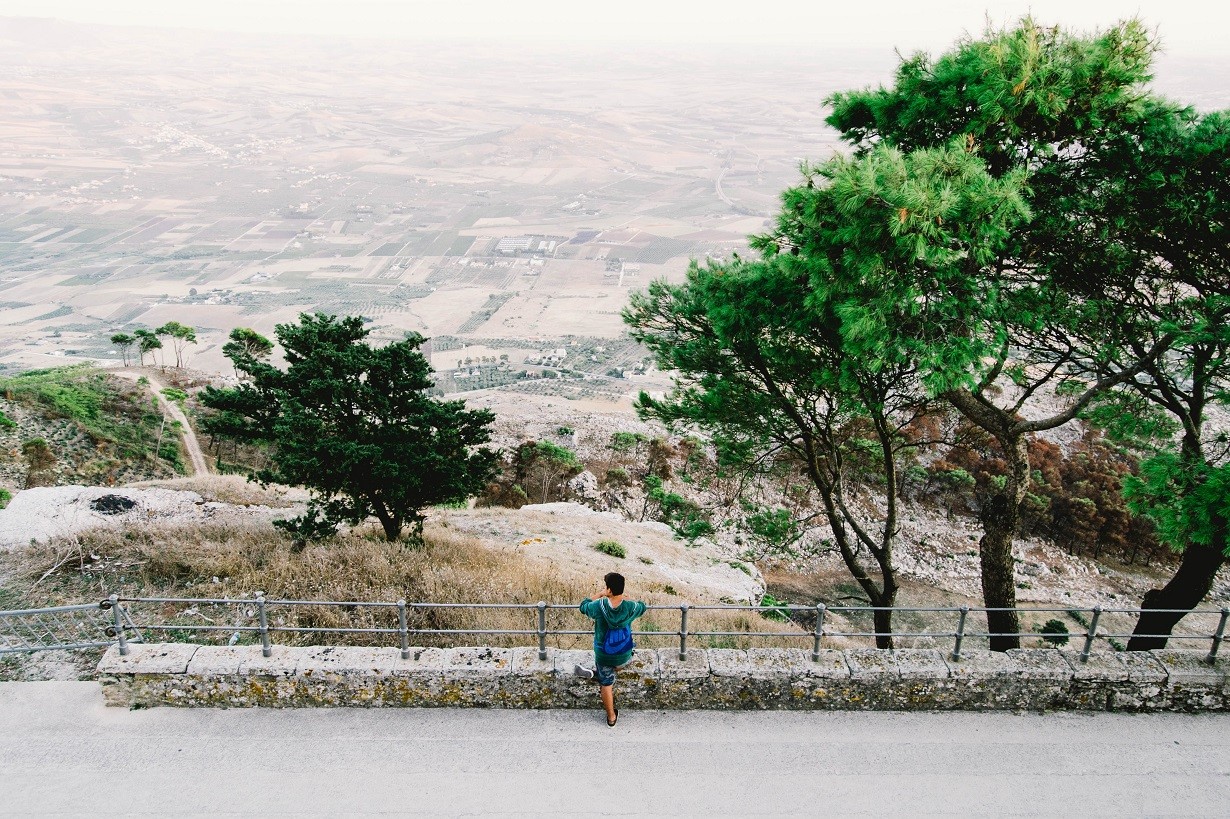 One memory that remains with me more than many others is of an impromptu stop I made along the way when I stumbled upon a little cafe in the middle of nowhere, as they say – although it was in the middle of somewhere that was in the middle of Sicily, which is in the middle of the Mediterranean, so it was midday all around. In fact, I discovered that most Sicilians are not so captivated by the center of their island, the entroterra, preferring by far the coastal towns, dove c’è il mare. Not me, at least not in this case, not that day.

Honestly, I can’t remember where it was, although I think it must have been at the bottom of Val di Noto, but again, like I said, far from the coast, very inland, all burnt and brown hills because it was summer time. I was driving a red Fiat something or other, 500 or Punto, and I remember the sales pitch when I rented it in Catania, from a young lady who wasn’t Italian but most likely from a neighboring Slavic country or some other place on the Adriatic – or at least east of Sicily. Anyway, I vividly remember her telling me that, wouldn’t you know, her brother-in-law was also an Aquarius, something that apparently occurred to her as she was copying. the necessary information from my driving license. If I remember correctly, the sale had already been made and we were in the process of drafting the contract, but whatever, a sales pitch is a sales pitch. She may just make a deposit in the goodwill bank, because what I found out when I got in the car was that there was no radio. But at this point, what can I say, with the astrological connection I had with one of his step parents. So I left.

The lack of radio quickly ceased to be a problem as I made my way through the hills, which were not only beautiful in their austerity but also a special intellectual fascination for me, their stone walls. dry in particular. I took the turns quite easily and quickly while remaining totally absorbed by the scenery. This was when I came closest to a serious car crash once I saw, after climbing a particularly steep hill, that I was sort of a few feet from the rear bumper of another car. I stepped on the brakes and felt, for the first time in my life, the special feel of the anti-lock brakes, this controlled and indexed vibration, an oscillation that also penetrated the bones and muscles of my right leg and ultimately my whole body. body. I was stupid and careless but I got lucky and avoided a collision.

I had been driving for a few hours and figured it was time to stop for lunch although I was pretty sure it was only late in the morning. Arms still agitated with adrenaline, I turned onto a side road and found that the scene had suddenly become fairly quiet. Compared to the other road, the one I was on now seemed greener and more closed, the hills more cuddly – coccolanti maybe in Italian – cozy and protective. It wasn’t long before I stumbled upon a small hut on the left, so I immediately stopped and parked in the little patch of dirt that adjoined a partially enclosed space that contained a few sets of tables and chairs, including one. or two. with umbrellas.

I walked past them and entered what appeared to be a small bar that also served food, just a lot of little things under a display case as well as a glass door or two with bottled drinks in it. Tucked away in a corner – the whole scene seemed quite dark, especially since I had just stepped in from the dazzling sun outside – was a family made up of a woman in a very late stage of pregnancy, a man who could have been her. husband or brother, and a younger wife, who crept behind the counter, dodging and slipping like women do who are natural flirtatious, a way of acting that is part of their nature and that they perform apparently without any particular strategy or intention, and which in any case, it is entirely beyond the competence of anyone without female anatomy and, I would bet, female hormones.

I was taken by surprise by it all and apparently stood there frozen in the twilight without indicating what I wanted. Soon after, the man got up from the table, where it looked like they were about to start, and asked if I wanted something to eat. I said yes, so he suggested that I sit outside and that he would be with me shortly.

So I sat down and it didn’t take long for all kinds of things to start coming out: little slices of frittata, cheese, olives, peppers, wine and of course bread, as well as some other things I forgot, all I happily consumed at a perfect little table on a perfect little slab, overlooking a gorge that stretched for miles beneath me. I think the place was called The Little Green something or other, only obviously in Italian.

I had taken more than my dose but still had to have a dessert, which had to be some kind of pie or cake, followed by coffee and some kind of liquor that the man offered as a ammazza coffee. After all this I had to sit down and wait a while for the effects of the drinks to wear off, especially the liquor – a amaro – which always seem to hit me like a hammer.

There is a second part of this story, but I have run out of my 1000 words, so we will have to wait for a later piece.

Italics Magazine was born from the idea of ​​two friends who believed that Italy lacked a complete, in-depth and general source of information in English. While some publications do a great job, writing about the latest news or focusing on specific areas of interest, we believe other types of quality information are just as necessary to better understand the complexity of a country which, very often, is only known abroad for the headlines our politicians make, or for classic tourist clichés. This is why Italics Magazine is quickly becoming a reference for foreign readers, professionals, expatriates and the press interested in covering Italian issues in depth, appealing to various schools of thought. However, we started from scratch and we are self-financing the project through advertisements (not too intrusive), promotions and donations, because we decided not to go for a paywall. This means that although the effort is greater, we can certainly brag about our independent and free editorial line. This is notably possible thanks to our readers, whom we hope to continue to inspire with our articles. That is why we ask you to please consider giving us your important contribution, which will help us to make this project grow – and in the right direction. Thank you.