The Mt Kenya Foundation pledged to work with the administration of President-elect William Ruto days after the Supreme Court upheld his victory.

In a joint statement with the Gema Cultural Association (GCA) on Friday, September 9, tycoons in the vote-rich region noted that the election period was over and the country needed to move on.

“We take this opportunity to congratulate President-elect and his Deputy Rigathi Gachagua on their election as President and pledge our support to his government and pray that God will help him realize the vision of our great nation,” it read. partly in the statement. .

Furthermore, the group called on the new Head of State to prioritize the unity of the country like his predecessor President Uhuru Kenyatta.

“As a father would, we expect the President-elect to develop the country in the same way. All elected leaders should address the issues of drought and high cost of living affecting Kenyans.”

Regarding their support for former Prime Minister Raila Odinga in concluded polls, the group maintained that they believe in the candidacy of Azmio’s presidential candidate.

The group further explained that the handshake between Uhuru and Raila in March 2018 brought the country so much comfort at a difficult time.

“We appreciate their immense contribution (Raila and Martha Karua) to the democratization process of this country,” they praised presidential candidate Azimio La Umoja and his running mate for their quest for justice.

Rigathi Gachagua had urged the group to collaborate with Ruto’s government, which he said would accept everyone, including those who opposed their candidacy for the presidency.

“I welcome those of the Mount Kenya Foundation who were against Ruto’s leadership. Come and build Kenya with us,” Gachagua said then. 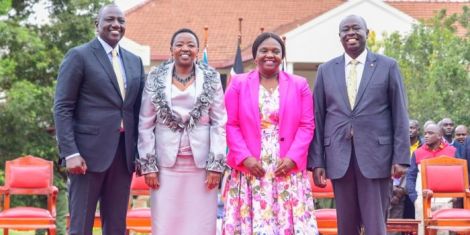