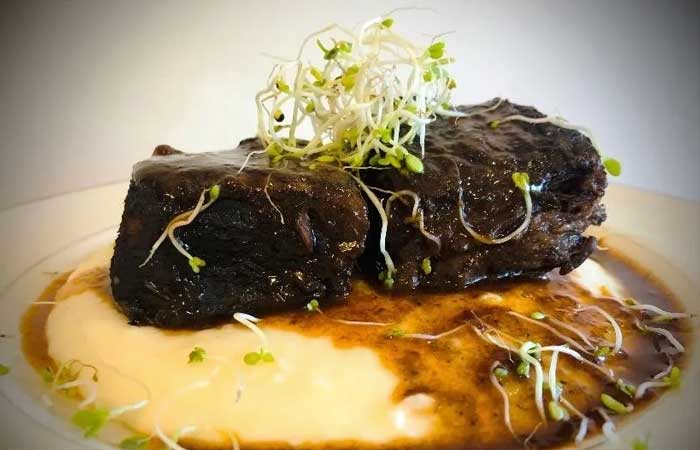 Made from repurposed shipping containers, the dining space at 128 Genesee Street in Buffalo has rarely been bored and is now home to another unique concept: Blue Cave, a European-Sicilian bistro.

First up was Rocco Termini’s whimsical Dog e Style – a fancy place for sausages. Then it hosted a rotating cast of owners, eventually becoming the hugely successful Casa Azul for four years. And now the restaurant hopefully has another long-term principle in the form of chef-owner Mario Bianca and his bistro concept.

In a tale as old as time, Bianca, of Sicilian descent, met his wife, originally from Western New York, when they were both living in Virginia. Bianca had spent years cooking in Washington, DC when the couple made the decision to move to Western New York just before the pandemic hit. Bianca spent the past two years cooking at Niagara Frontier Golf Club and SunCliff on the Lake before opening the doors of Blue Cave.

The Sicily native says he’s more than ready to fend for himself and showcases some of the foods he ate growing up.

“I worked on this menu for two years, because I understood what people like to eat here,” he says, with a strong Sicilian accent.


If you grew up in Western New York, you probably spent time in “red sauce” joints. You know the ones – places where parents took their sweaty kids at the end of a long hockey season or where the family took Grandma for her birthday. Comfort and tradition served with an occasional touch of awkwardness.

As it ages, the Chicken Parmesan doesn’t hit like it used to, and thankfully Blue Cave will deviate from the classic Italian-American formula. The opening menu features Sicilian classics like arancini, chickpea fritters, grilled octopus and rigatoni alla norma. Greater Italy is also represented here, in the Bolognese gnocchi and brasato di manzo – braised short ribs with gravy and mashed potatoes.

But Bianca is not strictly attached to the Italian classics. Dishes like duck a l’Orange and salmon en croute have Bianca flexing a bit of Gallic flair.

“We have duck à l’Orange in Sicily,” he says.

In addition to the food menu, there’s also a full bar, with a European-focused wine list. The restaurant seats approximately 45 people indoors and six tables outdoors during the summer months. Expect Sunday hours and an Italian-style brunch to roll out this summer.

While eating and drinking well is essential, Bianca says the long-term success of the Genesee Street location will depend on the quality of service.

“To me, offering hospitality is very important,” he says. “I worked in this field for 25 years. I know what it means to be a waiter, manager, GM, dishwasher… Every part of the restaurant, I know. I know what servers like and I know what guests like.

“People are what make the company successful. You may have a great leader, but success comes from the team.

Want to share information or news with us? Send us a note!