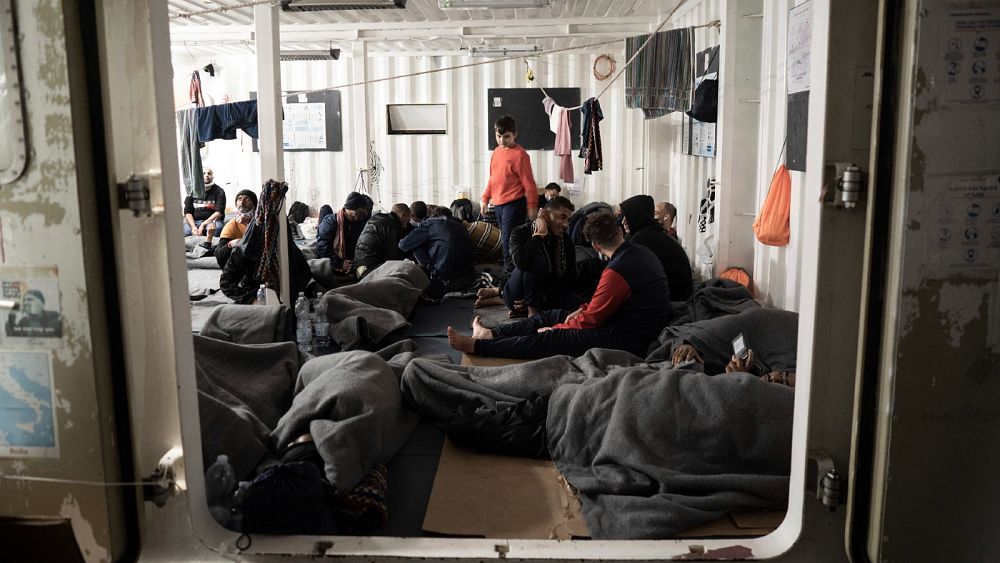 The European Commission on Wednesday called for the “immediate disembarkation” at the “nearest place of safety” of those on board the Ocean Viking rescue vessel.

This is an unusual move for the European Union executive, as immigration decisions are a national matter.

The European Commission said in a statement that “the situation on board the ship has reached a critical level and must be urgently addressed to avoid a humanitarian tragedy”.

“The legal obligation to rescue and ensure the safety of life at sea is clear and unequivocal, regardless of the circumstances that lead people to find themselves in distress,” he added.

The Ocean Viking ship, operated by SOS Méditerranée, has 234 people on board, including more than 40 unaccompanied minors and four children under 4 years old. Some of them have been stuck on the ship for 19 days.

The vessel is currently near the Italian island of Sardinia, according to the MarineTraffic.com website.

SOS Méditerranée said on Tuesday it had sent a request for a place of safety to the French authorities and that it expected to arrive in international waters near Corsica on November 10.

The ship has requested permission to dock daily in an Italian port since October 27, but has been repeatedly refused.

It then began sending daily requests to French, Spanish and Greek authorities from November 2 to achieve similar results.

“The situation on board the Ocean Viking has reached a critical limit. We are facing very serious consequences, including the risk of loss of life,” said Xavier Lauth, director of operations of SOS Méditerranée, in a statement on Tuesday. communicated.

“The physical and psychological well-being of survivors and crew has been depleted by more than two weeks of stranding at sea.”

The ship’s search and rescue coordinator, Nicola Stalla, meanwhile said that “in recent days, maritime and humanitarian laws have been blatantly violated in Sicily, with the implementation of selective disembarkation processes and discrimination against people rescued by the ships of the NGOs Humanity 1 and Geo Barents. .”

The Italian government reminded of the “principle of sincere cooperation”

Italy’s new right-wing government has allowed the ships Humanity 1 and Geo Barents, operated by SOS Humanity and Médecins Sans Frontières (MSF) respectively, to temporarily dock in Sicily on November 5 and 6.

However, Rome only allowed a total of 600 people to disembark following “vulnerability” assessments by two doctors selected by the authorities.

The Commission added in its statement that it “recalls the principle of sincere cooperation and calls on Member States to work together to ensure a common response, with the sanctity of life being of the utmost importance and primary consideration.”

He also called for more support for “member states that regularly receive arrivals by sea”, including through the solidarity mechanism.

The Commission’s call came just an hour after the UN High Commissioner for Human Rights told Italy and the EU that ‘politics should not come at the expense of people in distress”.

“Migrants need our full support – humanity demands it. Human rights must be at the heart of search and rescue efforts. Prompt disembarkation in a safe place for those rescued at sea is crucial,” added Volker Türk.

The EU executive unveiled its proposal for a new pact on migration and asylum in 2020, which provided for a predictable and reliable migration management system.

It also calls for stricter contributions from Member States in terms of relocations or support in other forms, such as financial aid.

But member states disagree on a wide range of issues, including whether contributions should be binding.

At least 1,337 people have gone missing on the Central Mediterranean migration route this year, according to Missing Migrants Project, an initiative implemented by the International Organization for Migration, or IOM.