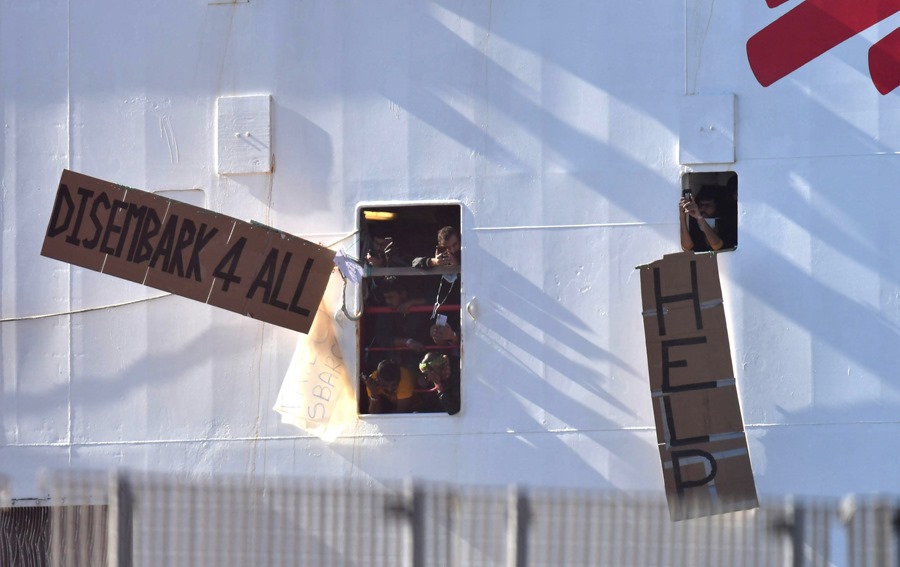 Catania, Italy, November 8 (EFE).- Two Syrian refugees who tried to defy Italy’s migratory blockade by jumping from an NGO rescue ship and swimming to shore spent the night in the Sicilian port of Catania.

The migrants, who left the ship on Monday, refused to return to the Doctors Without Borders (MSF) ship Geo Barents, which rescued them from the Mediterranean Sea on October 27.

“They would rather go with the police than go back to the ship,” Geo Barents head of mission Juan Matías Gil told Efe.

Italy’s Infrastructure Minister, anti-migrant instigator Matteo Salvini, has pushed for a policy of only allowing vulnerable people to disembark migrant rescue ships, and says others should be taken to the country whose flag the ships fly.

International maritime law, however, requires that “anyone rescued at sea be promptly disembarked and brought to a ‘place of safety,'” the UN said.

“Saving lives and preventing deaths and injuries must remain the collective priority of States. The law of the sea requires that those in distress at sea be rescued and assisted,” the UN said in a statement.

In the wake of new Italian legislation, two humanitarian ships remain stuck in Sicilian ports – the Norwegian-flagged Geo Barents and the German-flagged Humanity 1, which together have about 250 people on board, according to Human Rights Watch.

Salvini was previously at odds with NGOs he accused of facilitating illegal migration during his tenure as interior minister between 2018 and 2019.

The two Syrians who left the ship on Monday, named by MSF Sea as Youssouf and Ahmed, had been berthed at the Catania wharf for around 24 hours on Tuesday.

On Monday night, a small van remained parked next to them so they could take shelter from the drastic drop in temperatures in the damp harbour.

Antonio Nicita, a senator from the opposition Democratic Party (PD), visited them on Monday evening and told reporters that “they are fine” and “just waiting”.

“These are the legal inconsistencies in this case. They need to come down, be heard, make the corresponding demands and move on,” lamented the head of the rescue vessel.

According to Matías Gil, Salvini’s policy refers to humanitarian boats that arrive in Italian waters and ports, in particular the Geo Barents and the Humanity 1, but does not use the terms “people” or “migrants”.

Little is known about the legal situation of Syrian migrants stranded in Catania.

One of the Syrians, from Damascus, told medics he tried to escape from Libya six times but was always intercepted by the North African country’s coastguard and returned to detention centers where he had suffered so much that he now suffered from chronic back pain.

The other left for Europe in the hope of being able to take his four daughters with him, given that they live in an area controlled by armed groups who “abduct people for ransom and the situation is out of control”. .

The two have been able to communicate with their families for the past few hours, after days without being able to speak with loved ones.

But, since Tuesday morning, they have both refused to eat or drink and one of them has been taken to hospital with a high temperature, according to MSF sources.EFE
gsm/ch-ks/jt