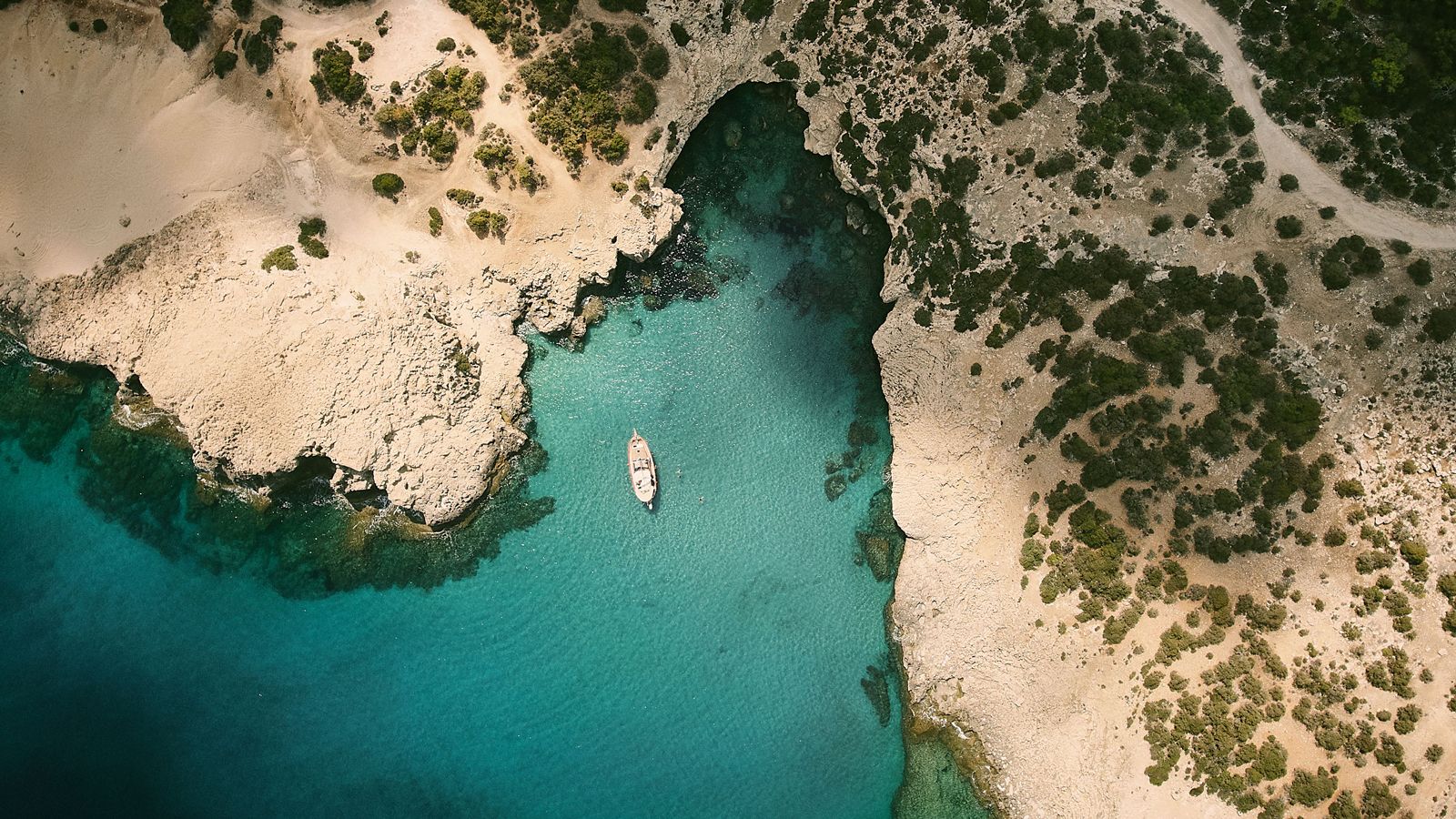 While it’s customary to start thinking about chartering in the Caribbean towards the end of summer, this period is still an excellent time to charter in the Mediterranean, allowing you to avoid the crowds and find quieter docks and deserted beaches. Here are the best places that stay warm this time of year and are worth exploring before migrating to more tropical climes.

With over 300 days of sunshine and temperatures around 30 degrees from April to November, Cyprus’ season is akin to a Middle Eastern climate and remains a popular spot towards the end of summer. Over the years, the island – which is one of the largest in the eastern Mediterranean – has acquired a slightly unfair status as a package hotspot teeming with tourists. However, its archaeological wonders, tranquil anchorages and extravagant properties scattered along its 400 miles of coastline are not the same.

The superyacht infrastructure in Cyprus is also getting stronger, especially under the leadership of Limassol Marina, which has 650 berths and can accommodate yachts up to 110 meters. And there are more marinas to follow with two more under construction along the south coast of the island. But despite all this development, you’ll still pass through untouched hills and forgotten coves towards Paphos, not to mention luxury hotels such as Anassa, Amara and Almyra, which remain open until November.

Cuisine throughout the island centers around European flavors with mezze-style sharing plates, often featuring fish and halloumi. And you can count on the fact that dinner parties are a long-winded affair that can last late into the night.

Famous for its positioning at the toe of Italy’s boot, Sicily is also one of the largest islands in the Mediterranean and a good place to catch some rays before the sun sets at the end of the season. The island is full of competing influences – having been ruled by the Germanic Vandals, the Ostrogoths and the Byzantine Empire – which have manifested numerous archaeological sites across the island, the most famous being the Temple of Concordia, one of the best preserved temples on the southwest coast of the islands.

While most associate Sicily with Etna (visible from the Taormina anchorage) and the Mafia, its shores are dotted with sublime hotels such as the Verdura Resort, the Grand Hotel San Pietro or the Belmond Grand Hotel Timeo. The beaches here are also very attractive, such as the beaches of Faraglioni, made up of lava rock, and Playa di Catani with its golden sand, which at this time of the year are not likely to be overcrowded. Food across the island is quintessentially Italian, best known for its arancini, pasta and cannoli.

Another of the Mediterranean’s archaeological gems, Sardinia remains a bustling destination for yachts well into October, with temperatures remaining around 20 degrees until November. For yachtsmen, it’s the north of the island, particularly Porto Cervo, that takes the crown as the central yachting hub, including the glistening Costa Smeralda, home of the Yacht Club Costa Smeralda. But sail south and you’ll discover hundreds of scalloped bays, glistening sandy beaches and mysterious Bronze Age ruins.

While Sardinia’s reputation for sublime beaches tends to appeal to the masses, the crowds have mostly thinned out late in the season, providing an opportunity to catch a few rays in peace. There are also several beautiful beaches in Sardinia that are only accessible by boat, including Cala Goloritzé and Cala Luna.

In Turkey, expect warm days and mild evenings through October before temperatures begin to drop slightly in November. Unsurprisingly, Turkey’s cyan bays attract crows during high season, but it’s a sublime place to sail once things start to cool down. Offering impressive moorings in places such as Bodrum, Marmaris and Fethiye, cruisers sailing these waters will propel their guests into a cultural melting pot where East meets West, best enjoyed away from the crowds.

Turkey’s most famous cities are on the coast, such as Istanbul, Marmaris, Fethiye and Kas, each home to labyrinthine markets and bazaars, not to mention luxury hotels such as the Four Seasons Hotel in Sultanahmet and D Maris Bay on the Datca Peninsula.

But there’s more to Turkey towards the end of the season than bustling cities, as the 100-kilometre-long wooded finger of Datca shows, proving that Turkey has a quieter side too. Here you will discover secluded fjord-like coves such as Dirsek Bükü and Bencik, where only a few yachts will anchor in the bays. Its primitive topography also makes it a little harder to reach, so these places are unlikely to be overrun with tourists, just glistening sandy beaches, verdant cliffs and quiet restaurants serving local seafood.