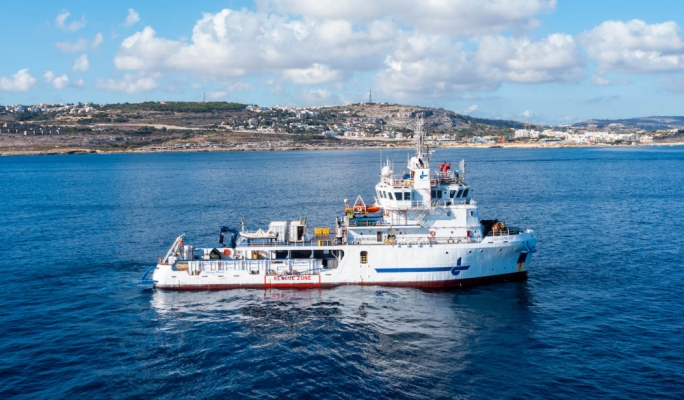 Work on Malta’s submarine power cable with Sicily began with a preliminary study of the seabed seabed route.

The route stretches for about 100 km from Baħar iċ-Ċagħaq to Marina di Ragusa, Sicily. The maximum seabed depth of this route is expected to be 160 m.

The offshore works are being carried out by Interconnect Malta (ICM), a state-owned company set up last year to develop infrastructure related to the second interconnector and the hydrogen-ready gas pipeline between Malta and Sicily.

Malta already has an undersea electricity cable with Sicily which was energized in 2015. However, the government has decided to install a second interconnector to ensure security of supply and additional electricity supply for meet growing demand.

Coastal survey work started in Sicily last week using a smaller vessel, while coastal surveys in Baħar iċ-Ċagħaq, Malta will start shortly. Depending on weather conditions, the sea survey will continue until mid-October. The contractor will then perform data analysis and report generation.

The preliminary marine survey is essential as it will provide bathymetric, geophysical and geotechnical information to plot the safest and most sustainable route for the submarine cable. It will also provide the data needed to design cable burial methods and the physical protection of the overall electrical scheme.

Interconnect Malta said on Friday the preliminary route had been designed to avoid ecologically significant sites as well as bunkering, aquaculture, tourism, fishing and trawling areas, and other restricted areas.

“To provide effective redundancy, the design also keeps this cable as far away as technically possible from Interconnection 1, the first undersea power cable between the two countries powered up in 2015,” the company said.

ICM engaged the Italian company Fugro SpA to carry out the preliminary investigation earlier this year, following an international tender. It will use the Urbano Monti offshore survey vessel, which is equipped with state-of-the-art positioning, multibeam echo sounder, side-scan sonar, sub-bottom profiler, magnetometer, ROV, gravity coring, cone penetrometer, sample collection and other equipment needed to perform a high quality survey as required by the project.