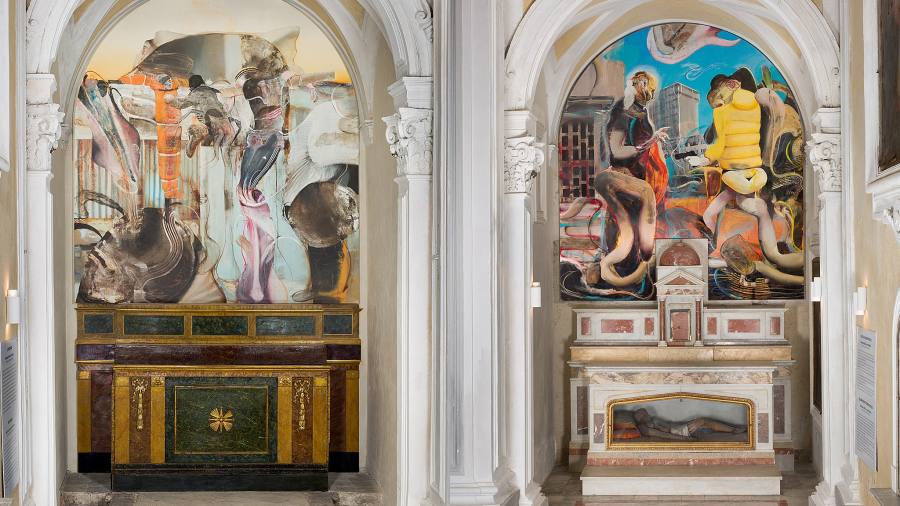 The painter Adrian Ghenie: “I wanted to play directly in the fabric of the building”

The work of Romanian painter Adrian Ghenie is certainly very impactful. It hits you right between the eyes and somewhere in the stomach. His bubbling canvases, with figures and faces often worked in frenetic abstraction, have the colorful charge of the Renaissance and Baroque paintings he loves, the story of Delacroix, minute details drawn from Flemish scenes, and nods to Van Gogh, Courbet and Rousseau. , all taking place in multiple layers of imagery, much of it taken from the internet.

You could say he makes art about art. Before painting, he creates elaborate paper collages, moving images around until he finds the perfect fit. “It’s like working with Lego,” he says. “Everything has to fit together.” Then he worked intensively and alone in his Berlin studio, producing no more than 15 pieces a year.

Today two major paintings he made in 2019 and 2020 can be seen in the Chiesa della Madonna della Mazza in Palermo. The 17th-century church sits on the city’s busy via Maqueda, surrounded by shops selling slices of pizza, shoes, eyewear and shiny dresses. The huge canvases, custom-made to fit the vaulted chapels on either side of the altar, appear at first glance to conform to traditional subjects of religious art and stylistically in sympathy with the baroque architecture of the church. “I wanted,” says Ghenie, “to play directly into the fabric of the building.”

Get closer, however, and something more surprising begins to emerge. If we have become immune to the blood and guts of historical religious art, then Ghenie might just lift us out of our apathy. “These images are taken from real life,” he says.

On the left are two figures, each attached to a cross, one wrapped in a bright orange body bag; another dressed in Adidas track pants. They are victims of Christian crucifixions perpetrated in Syria in 2015. On the right is Padre Pino Puglisi, the Catholic priest murdered by the Mafia in Palermo in 1993. Facing his killer, his dignified position – outstretched hand – is that of Saint Augustine in Michael Pacher’s painting of Saint Augustine and the Devil of 1483; behind him are the public housing and corrugated iron fences of the impoverished neighborhood of Brancaccio where he preached and fell.

“I wanted baroque, classical,” says Ghenie, “but with a journalistic and cinematic touch.” The devil, who holds the gun, is dressed in a lemon yellow down jacket. “The color of jealousy”, says the artist. Beneath it is a swirling intestinal mass.

The church was built between 1603 and 1606, as a place of respite for the city’s poor. Like many others in the Sicilian town, it had been empty and abandoned for 40 years. But when Ghenie met Italian writer and curator Alessandra Borghese (from the aristocratic Borghese family) at a dinner party in Paris in 2017, he told her he wanted to do a painting in a church. “I wanted to follow the path of Caravaggio and Michelangelo, to create something for eternity,” he says.

Borghese, who lives between Rome, Paris and also Palermo – and, thanks to her grandmother, Principessa Sofia Lanza di Trabia, is a quarter Sicilian – has secured the support of Father Giuseppe Bucaro. The brilliant director of the cultural heritage department of the Archdiocese of Palermo helped her find a suitable church, while Ghenie gallerist Thaddaeus Ropac also offered his support. “The first church we saw looked like a garage with an altar,” says Ghenie. “Then we came here, and I saw the two chapels and I knew it was true.”

The Chiesa della Madonna della Mazza took almost three years to be renovated and now, painted in pale grey, white and yellow, it has fully regained its Baroque elegance. Its original works of art, including those by artists Battistello and Zoppo di Gangi, are being restored; another from the School of Caravaggio has been reinstalled in its original location, to the right of Padre Puglisi.

The church officially reopens to the citizens of Palermo on June 9, although in recent months the doors have sometimes been ajar and passers-by seem magnetically drawn inside by Ghenie’s works, which literally shine at the back of the nave. When I visited Ghenie and Borghese, several locals came in, looked at the paintings carefully and for a long time, then knelt down to pray.

“So many Palermitans will come here and remember their own losses,” says Borghese. “Although my mother was worried about the weapon,” she said of the solid black gun in the assassin’s hand. “But it is the tool that delivers today’s martyr,” Ghenie continues. (Puglisi was beatified in 2013 by the Catholic Church.)

People expect communism to be tumultuous, but it is incredibly quiet. We lived in a kind of silence

Ghenie was born in the small Romanian town of Baia Mare in 1977, under the communist dictatorship of Nicolae Ceausescu. “Palermo is like Bucharest in the 1980s,” he says. “Not everything was rebuilt in shiny, plastic materials. Although Palermo is more sensual. It’s very southern and textured. Borghese describes it as an open city, on the borders of Europe, outward-looking, tolerant and inclusive.

Her family is Orthodox Christian, but religion has never played a big role in her life, nor has communism. “People expect communism to be tumultuous, but it’s incredibly quiet,” he says. “We lived in a kind of silence. When Ceausescu was overthrown in 1989, things became even calmer.

He attended an art school in the northwestern city of Cluj after selling his first painting at the age of 16. “I rented a space and organized an exhibition,” he tells me. “I sold seven works—winter landscapes—for $50 each. I just wanted people to see my work. By the age of 39 his paintings were selling at international auction houses for over £3million.

Last month, at Sotheby’s in New York, a work called “Degenerate Art”, made in 2016, sold for more than 9 million dollars. There he reworked Van Gogh’s famous 1889 self-portrait, with its pastel blue and green tones, in a riot of yellow, purple and red, synthesizing his own painterly self with that of the troubled Dutchman.

Such exorbitant prices can complicate a painter’s career, especially one who wants to be judged on his art, not his public presence. “The kind of success that comes with the art world is more suited to extroverts,” says Ghenie, who prefers being in her studio to being in the spotlight. With this project, he got out of this system: the paintings of the Chiesa della Madonna will never be put up for sale. “It is above all a gift to the people of Palermo,” says Borghese.

Nevertheless, the art world will come, as it will see the Chapelle Rothko in Houston and the Chapelle du Rosaire in Vence with its murals and stained glass windows by Henri Matisse. “It will make the city a place of artistic pilgrimage,” says Borghese, who has already worked hard to put it on the cultural map. (She staged the first African opera, with a libretto in Sahelian dialects, at the Teatro Massimo in 2018.) Ghenie, however, will be back in her studio, palette knife in hand, researching her next project, applying painting on canvas, making we think.

Catania appointed to Board of Regents | New