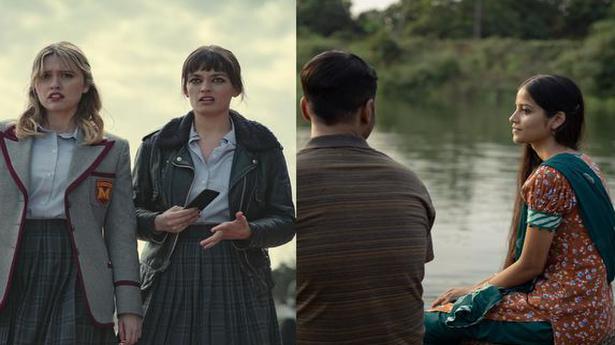 Our favorite Moordale gang returns; three stories of love, loss and longing in a new anthology; and a biopic on Michael Schumacher are some of the new highlights of the platform

Here’s the full list of titles coming out soon:

The life of Michael Schumacher, who became a Formula 1 icon thanks to a daring and provocative spirit, is explored in this insightful documentary.

Scary stories fan Alex must tell a scary story every night – or stay trapped with his new friend in a wicked witch’s magical apartment forever.

Gary and his crew strive to survive the chaos and carnage of Final Space and escape the evil Invictus, eager to harness the powers of Mooncake.

He-Man and the Masters of the Universe

Mighty teenager Adam and his heroic team of misfits discover the legendary power of Grayskull – and their destiny to defend Eternia from the sinister Skeletor.

My heroes were cowboys

Robin Wiltshire, an immigrant inspired by Hollywood western iconography, finds meaning and redemption through the art of horse training.

Hundreds of cash strapped players accept a strange invitation to participate in children’s games. Inside, a tempting prize awaits – with deadly stakes.

Chicago party girl Diane is a fan of the Bears who eat beef sandwiches and have a knack for avoiding adulthood. But she has a soft spot for her nerdy nephew.

It’s a New Year, Otis is having casual sex, Eric and Adam are official, and Jean has a baby on the way. Meanwhile, new director Hope tries to bring Moordale back to a pillar of excellence.

The father who moves the mountains

When his son goes missing on a snowy hike in the mountains, a retired intelligence officer will stop at nothing – and risk everything – to find him.

Tired of odd jobs, three Marseille cops have the chance to dismantle a major drug network. But the lines blur when a key informant makes a big request.

As big city life buzzes around them, lonely souls discover surprising sources of connection and companionship in three stories of love, loss and longing.

Love on the Spectrum: Season 2

Love on the Spectrum Season 2 continues to tell the stories of people with the autism spectrum as they navigate the world of dating and relationships. With a few familiar faces and some lovely new ones, this season represents an even wider range of people and personalities, showing just how diverse the autism spectrum truly is.

Go! Go! Cory Carson: Chrissy gets behind the wheel

From arcade games to sleigh days and hiccup cures, Cory Carson’s curious little sister Chrissy is racing for fun and adventure all over town!

Reunited in the midst of a pandemic, future Sam and Lionel look back on their epic last year together in Winchester – which plays out like a ’90s musical.

Confessions of an invisible girl

When the smart but socially awkward Tetê joins a new school, she’s ready to try anything to fit in with the cool kids. But soon, his plan hits a snag.

In 1960s Spain, a Holocaust survivor joins a group of agents seeking justice against the hundreds of Nazis who fled to the country for hiding after World War II.

After a fatal break-in into a couple’s new dream home, the traumatized woman searches for answers and learns that the real danger has only just begun.

Monsters Inside: The 24 Faces of Billy Milligan

In the late 1970s, an accused serial rapist claims that several prominent figures control his behavior, triggering a legal odyssey that captivates America.

After most of her family are murdered in a terrorist attack, a young woman is unconsciously drawn to join the very group that killed them.

A woman adjusting to life after a loss is confronted with a fiery bird that has taken over her garden and a husband who struggles to find a way forward.

A look at life beyond bars for a group of incarcerated women serving time in a New Orleans jail.

A community experiences miraculous events and fearful omens after the arrival of a mysterious priest. From the creator of “The Haunting of Hill House”.

My little pony: a new generation

Equestria is divided. But a bright-eyed hero thinks earth ponies, pegasus and unicorns should be friends – and, pied-à-terre, she’s determined to prove it.

Continuing their quest for a coveted IIT seat, Vaibhav and his friends try not to let academic pressure – or teenage angst – take over.

When his niece crosses paths with a powerful drug kingpin, professional thief Mehdi and his team of skilled thieves are drawn into a violent and deadly turf war.

Vendetta: truth, lies and the Mafia

This documentary series examines the true story of two of Sicily’s “anti-Mafia” crusaders, both of whom were tried for major crimes themselves.

Pint-sized scientist Ada Twist and her two best friends ask big questions and work together to uncover the truth about it all!

Hollywood clichés attack! is a special show featuring some of the most famous films in cinema history as well as a plethora of A-Listers, screenwriters, academics and Hollywood critics as they guide us through the funny, weird and controversial clichés that appear on our movie screens.

A young woman is found brutally murdered in a playground in Copenhagen. Next to her is a small doll made of chestnuts. Adapted from the acclaimed novel.

Thibault, a hopeful romantic, believes his luck might change when sparks spring between him and Rose. But can he go from bestie to boyfriend?

Fashion assistant Maca is about to get her life back on track after a devastating breakup, when Leo, the man who broke her heart, returns. Seeking the support of their best friends, Adriana and Jime, the three of them will learn that love can be complicated.

Steven’s quest for delicious game in exotic locations takes him to the Rockies and Ozarks, the marshes of North Carolina and the prairies of Hawaii.

No one comes out alive

A horror story in a haunted house, a thought-provoking tale of immigrant life, and a world where ancient folklore can turn terrifying.

The Istanbul series about 1990s teens navigating awkwardness and grief returns for a second season.

In 1960s Rome, a meeting between a girl raised in a carnival and a girl from a wealthy household leads to new and unexpected intrigues, secrets and loves.

Briton arrested in Netherlands after being mistaken for mafia boss